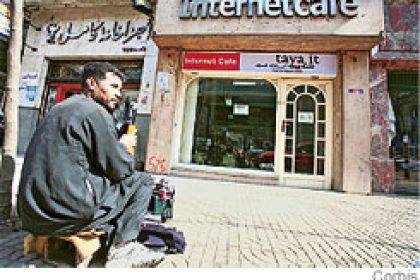 By MARIAM FAM in Cairo, CHIP CUMMINS in Dubai, JACKIE RANGE in New Delhi, and CHRISTOPHER RHOADS in New York
February 1, 2008;
A large swath of the Middle East and India suffered a second day of telecommunications woes, partially cut off from the rest of the world after two undersea Internet cables in the Mediterranean Sea sustained damage earlier in the week.
Shoeshine worker awaits customers outside an Internet cafe in Cairo yesterday.

The cable damage also caused widespread disruptions in India, where the outsourcing industry — heavily reliant on the Internet — is a major contributor to the economy. However, India’s biggest technology and outsourcing companies by revenue, Tata Consultancy Services Ltd., Infosys Technologies Ltd. and Wipro Ltd., said they hadn’t been affected by the cable problems.

The episode comes amid an explosion in fiber-cable building globally. The demand for Internet bandwidth has risen steadily in recent years, driven to a large degree by developing countries coming online, including in South Asia and the Middle East.

Because of its position between the Red Sea and the Mediterranean Sea, Egypt has attracted a large share of the new fiber-cable construction, linking the new projects under way in the region to the European and Atlantic networks. Having so much fiber concentrated in one place that is critical to the wider region raises questions of vulnerability.

“If there was ever an example of how Cairo has become a communications hub to the Middle East, this was it,” said Thomas Byrnes, senior vice president for sales at GPX Global Systems Inc., which opened an Internet data-center business in Cairo to serve local Internet-service providers and other clients.

Mr. Byrnes, based in Lothian, Md., said his clients were scrambling to find other ways to maintain international connectivity in the wake of the damage to the cables. Having so much fiber in one location isn’t that unusual, he added, as operators want to share infrastructure costs when the undersea portions hit land.

On Wednesday, officials reported that two cables connecting Europe and the region were severed off Egypt’s coastal city of Alexandria. Egypt’s Ministry of Communications and Information Technology said in a statement that officials were working to reroute Internet traffic through other cables and through satellite networks. Officials said the damage to the cables may have been caused by bad weather, though it is unclear what happened.

Egyptian officials said initially it could take several days for the cables to be fixed and for Internet service to return to normal. One Internet service provider in the United Arab Emirates was more pessimistic, warning in a statement that it could be weeks before repairs were completed.

Puneet Tiwari, the director of the ISP Association of India, yesterday told Dow Jones Newswires that Internet connections there will take about eight to 10 days to be restored to normalcy. He said he expected affected Indian Internet-service providers to suffer some revenue losses.

A spokesperson for VSNL, the Indian telecom company involved in a consortium behind one of the damaged cables, said about a third of the customers using that cable, called SeaMeWe-4, were automatically transferred to another cable in the region, so their connectivity was restored immediately. The remaining customers who hadn’t signed up for that back-up service should have lower performance until the cable is repaired, according to the spokesperson.

Large-scale disruptions such as this are relatively rare. In December 2006, East Asia suffered weeks of outages after an earthquake damaged undersea cables near Taiwan.

In Dubai, one of seven emirates that make up the UAE, a number of free zones were hit particularly hard yesterday, including the Dubai International Financial Centre, an independently regulated complex housing two financial exchanges and a number of international banks. “It’s terribly slow,” said Philipp Lotter, a credit analyst for Moody’s Middle East Ltd., the credit-rating agency.

Trading volumes on some of the regions’ exchanges appeared slightly lower early in the day. It was difficult to determine if that was related to the Internet disruptions.

UAE Internet-service provider Emirates Integrated Telecommunications Co. said it was working on a timeline for a system recovery. 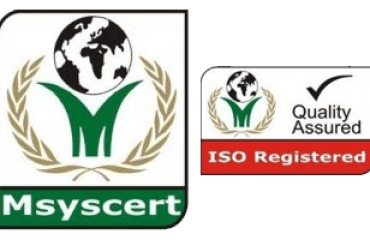 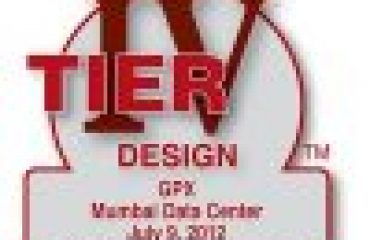